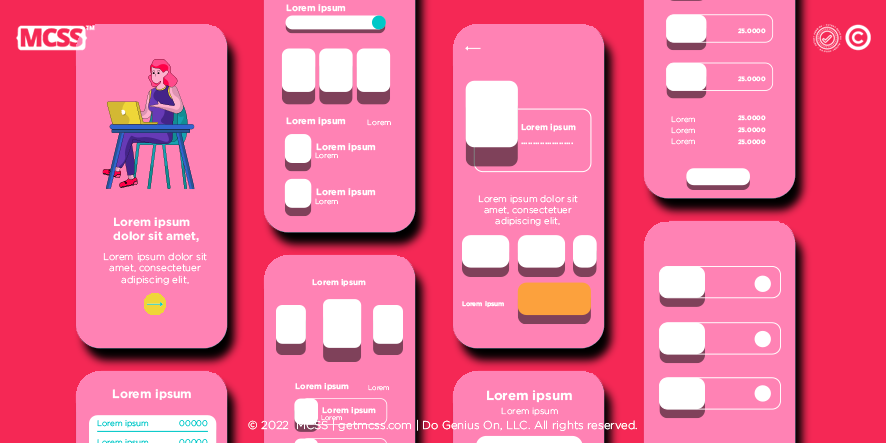 Developing native applications for mobile devices is crucial for business today. Every day billions of people around the world use an average of eight applications on their smartphones. If you are looking for a cost-effective way but still deliver the best user experience and performance to the end users when building mobile apps either for Android or iOS, the MCSS framework is the only option for you. With MCSS, you can reduce the time and costs of developing a native application for mobile devices by more than 40% and yet keep the same structure, look and performance on Android and IOS.

What is MCSS and how does it work?

MCSS, which stands for Mobile Cascade Style Sheet, is a framework developed simultaneously in SWIFT & JAVA so that developers can apply style sheets to native iOS and Android applications without having to modify the structure, design, or aesthetics.

This framework clearly shows what native mobile components are on both Android and iOS devices. By the use of classes and IDs, you can set the appearance for the components in a native application and create complex graphics  in the same way as you would in CSS, on both operating systems (Android and iOS) simultaneously. By using selectors with simple MCSS instruction lines, you can conveniently modify the style of  components or groups of components within an application.

It is undoubtedly a tool that can significantly reduce the work done by developers since it allows the control of multiple aspects such as design and aesthetics of multiple types of views simultaneously on Android and iOS. Its stylesheets can be stored locally in the native project, or a URL can be referenced, which allows real-time changes and updates to the app's views, thus allowing aesthetic updates to be made to apps without having to submit them to the app stores. In addition, it is possible to run MCSS in any native IDE such as Xcode, Android Studio, Eclipse, and more.

MCSS has many features and benefits that make it the only alternative for developers to build out their projects more comfortably and in less time, offering the best user experience and reliability a native app can have. Some of the main MCSS benefits are:

As mentioned at the beginning of the article, using MCSS can reduce the time and costs of developing a native application by almost half, since it works simultaneously with Android and iOS.

You can create complex designs without the need of extra code.

The style sheet is a very useful tool for any developer since it will allow you to create design features, simultaneously and without any limits. All without the need to spend hours programming or making a large number of lines of code.

A common problem faced by app developers is making changes to one or more views of an application in production. This becomes less of an issue because the MCSS stylesheet is updated simultaneously and in real-time on Android and iOS.

No matter how smart a person is, it is always difficult to learn new things, especially programming languages. Fortunately for application developers, MCSS shares more than 70% of the instructions of traditional CSS, meaning that any programmer with CSS knowledge can easily adapt to working with MCSS.

Can MCSS be integrated into a production project?

When an application is under development or in production, it is difficult to change the framework you are working with or to integrate others. It is not easy for developers to make this decision since some of the work done could be lost if it is not done the right way. Fortunately for all developers, the MCSS framework can be easily integrated into any application under development or in production by following the steps below:

1.             Open the application project in the developer's preferred native IDE.  MCSS can be used in a variety of them, such as Xcode, Android Studio, Eclipse, and more.

3.             Identify all the components of the application that you would like to control. This can be achieved by adding classes and IDs like in CSS

4.             Write MCSS rules in order to obtain the desired layout. In case you are using the layout of a website, it is just a matter of adapting the CSS files from the site.

6.             That's it, by integrating MCSS it is possible to considerably monetize application projects, plus native mobile development is much simpler.

Additionally MCSS offers free pre-designed themes available for download. The pre-designed themes allow developers to build even faster native mobile apps by adopting a structure and look and being able to edit all aspects of the theme in use, such as buttons, text boxes, labels, fonts, etc. Want to know more about MCSS, go to getmcss.com