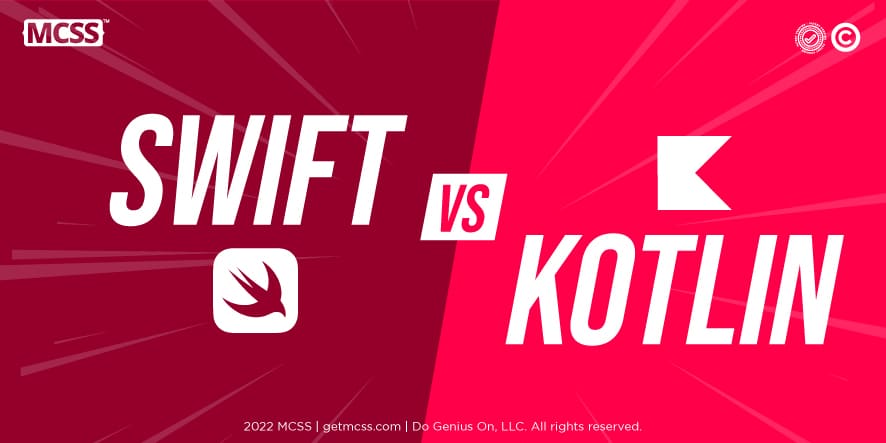 Kotlin arrived in 2016 and was introduced by JetBrains and Google; it has been widely used and liked by the programming community. It is a language that runs on JVM and is interoperable with Java. This was officially released for use in Android development in 2017. It requires a good knowledge of Java.

Swift is the one of choice for the iOS developer community at the moment. It is used for iOS apps, macOS apps, watchOS apps, and tv apps.

This language was designed by Chris Lattner to improve the also known Objetive-C.

This programming language is excellent in terms of compatibility with devices that run this code such as mobile devices, desktop servers, among others.

Swift has libraries with a large set of predefined methods. These allow easy use to structure the logic which makes it simpler to write the code as well as its maintenance.

Both programming languages are interoperable with their predecessors. If we take into account that when developing a native application, we need to develop it for each operating system, it is important to make this comparison to simplify the process. The string can also be generated in the format:

if you want to specify the format:

The Swift function has an argument label:

while parameterName is used within the function, argumentLabel is used by the caller.

When a reasoning label is not given, parameterName also plays the role of argumentLabel.

The closure is similar to lambda in Kotlin.

A simple example in Swift:

The type can be deduced from the context.

They can be passed as reasonings as a factor of another function to obtain nested functions (higher-order functions).

if the closure/lambda is the last factor, we can put it outside the parentheses of the function. if it is the only factor, we do not need to write parentheses(). The Swift and Kotlin class looks quite similar.

There is an ordering requirement: the class must come before any protocol.

The only thing different is the constructor, quickly it is the initializer:

In Kotlin, we could achieve the same result by typing this:

and in Kotlin, the class can have a init {} block to assist with further initialization work

Struct is a type of value.

And if the person is a struct, it would look like this:

The protocol is interface in Kotlin.

We can define a function and properties as contracts.

The properties may become:

There are slight differences in the protocol and the interface, such as that the class that incorporates the protocol does not need to use the override keyword in functions.

The extension is different in both Swift and Kotlin. In Swift it is used to store functions and properties while in Kotlin it is the top-level method adding the type before:

In Swift it would be:

And separated by a comma:

The type can be discarded using the dot syntax:

With enum, you can define properties and functions for both Kotlin and Swift

Main differences between Swift and Kotlin in a nutshell

In any case, if you want to develop a native mobile application MCSS framework will be of great help as it is developed simultaneously in SWIFT and JAVA so that programmers can apply the stylesheets in iOS and Android applications.

MCSS is a powerful tool that will help you to develop 100% native applications reducing development time and production costs.

To learn more about MCSS visit it at MCSS

Chugh, Anupam. “Swift vs. Kotlin: The Similarities and Differences You Should Know.” Better Programming, 6 May 2020, https://betterprogramming.pub/swift-vs-kotlin-the-similarities-and-differences-you-should-know-b2f1be201888. Accessed 8 September 2022.

Guide, Step. “How to use Kotlin for back end development.” Quokka Labs, 9 August 2021, https://quokkalabs.com/blog/how-to-use-kotlin-for-back-end-development/. Accessed 8 September 2022.