How to build a Native Android App 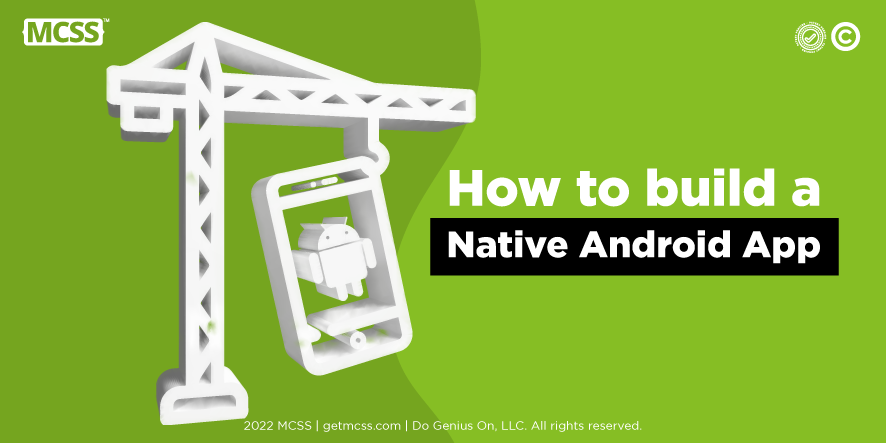 Native mobile apps are designed and developed using a specific operating system. Due to the nature of their design, these applications perform the best and offer the highest reliability. Android is a comprehensive software stack for mobile devices that includes an operating system, middleware, and a key application. This rich software resource is used in mobile technology through the Android SDK innovation module. Basically, Android is considered a mobile operating system. But it's not just limited to mobile devices. Currently, it is used in various devices such as mobile phones, tablets, televisions, etc.

Android started in 2003 as a Palo Alto-based startup called Android Inc. Google acquired Android Inc. and its key associates in 2005 for at least $50 million. Google brought to market the first mobile platform between mobile phone manufacturers and mobile carriers, the main advantages of which are flexibility and upgradeability. Google was quietly developing the Android operating system when Apple released the iPhone in 2007. Earlier Android phone prototypes were much like a BlackBerry, with a physical keyboard and no touchscreen. However, the release of the iPhone significantly changed the mobile computing market and forced Android makers to support more touch screens. However, the HTC Dream, the first commercially available smartphone with the Android operating system, featured a QWERTY keyboard and received critical acclaim upon its release in 2008.

At the end of 2007, the Open Handset Alliance (OHA) announced its formation. The OHA was a coalition of more than 30 hardware, software and telecommunications companies, including Google, Qualcomm, Broadcom, HTC, Intel, Samsung, Motorola, Sprint, Texas Instruments, and Japanese wireless carriers KDDI and NTT DoCoMo. The aim of the alliance was to contribute to the development of the first open source platform for mobile devices. Google released the public developer beta of Android 1.0 around the same time as the alliance announcement, in November 2007. It wasn't until Google released Android 1.5 in April 2009 that Google introduced the unique dessert-themed naming scheme. The name of Android 1.5 was "Cupcake". Around the time Android 4.4 KitKat came out, Google issued an official statement to explain the name: "Because these devices make our lives so much fun, every version of Android is named after a dessert."

Google makes incremental changes to the operating system with each release. This often includes security patches and performance improvements.

There are plenty of features of Android. Some of them are listed below:

There are many reasons why you should choose the Android mobile app development platform.

Android's minimum hardware requirements depend on the size of the device's screen and the type and density of the CPU. Originally, Google required a 200MHz processor, 32MB of storage, and 32MB of RAM.

Google publishes documentation detailing the hardware requirements that Original Equipment Manufacturers (OEMs) must meet in order for a device to be "Google Approved," meaning it comes with official Google apps. However, the open source nature of Android means that it can also run on lesser hardware and vice versa.

Advantages and disadvantages of android

There are the following advantages and disadvantages of native Android apps. These are:

* It gives you a better notification.

* This allows you to choose your hardware

* It has a better app market.

* Android will be more secure than i-phone operating system

* All applications are treated equally.

* Can install and change RAM

* An Android based product will be cheaper than owning it

* Google Chrome allows you to open multiple windows at once

* Android Market is much less admin control, sometimes there is malware

* No standardization of application quality

* The installation of advertisements annoys you

* Android has no default strategy or upgrade path

* Android application must be written in JAVA

An Android operating system for touchscreen devices brings a number of challenges that must be overcome in its development. So in a sense, the architecture of an Android platform consists of a set of software components designed to support a large number of Android devices. This mobile operating system is based on a layered software stack architecture consisting of a Linux kernel, a runtime environment, support libraries, an application framework, and an application suite. As part of building such a complex system, careful structural attention must be given to ensure that all Android Architect components do not conflict with each other. Android's architecture protects its many components from crashing completely, while keeping their independent functionalities intact. Some of the advantages of Android's layered architecture can be summarized as follows:

You can use Android Studio, which gives you everything you need to develop apps, including the Android SDK tools. Make sure you have installed JDK 6 or later before setting up Android Studio.

You can download the latest JDK from the link below and make sure you download the correct version (32-bit or 64-bit) for your system.

Set up Android Studio on Windows


Open Android studio. If this is your first time, you should see the welcome screen:

Click Start a new Android Studio project and give it a name (I'm using the Hello World app), a domain (I'm using HappyCoding.io), and a location (I'm just using the default). Click next. On the next screen, you can choose which devices you want your app to run on. If you choose older versions of Android, your app will be available for more devices, but you won't be able to use newer Android features. When developing a real app you will have to think more about this, but for now just keep the default settings (only for phones and tablets, Android 15). Click next.
You should now be on this screen:

Here, choose Blank Activity and click Next. On the next screen, give your activity a name (by default, MainActivity is fine).

Android Studio will now create your (currently empty) application. If this is your first time working with Android, the build will most likely fail. This is normal! It just means you need to install a few more things. Don't worry, Android Studio will do most of the work for you - click the Install the missing platforms and sync project link. Click the Install Buildtools link.
Finally, your app should compile successfully!

We’ll get more into the details of what this is doing later, but for now just know that this is creating a label and a button. Now open up MainActivity.java (the name might be different if you named it something else) and paste this in:

This code takes the button we created in activity_main.xml and adds a listener that displays a dialog when we click the button.

Hit the play button again and you should see our custom app running on your phone:

Example of Some Popular Android App in PlayStore


The demand for mobile apps is increasing day by day and the Android market accounts for about 90% of all operating systems such as iOS and Windows. Therefore, there is a huge potential market in Android application development. So why delay? Happy coding!


As Android Studio is a co-operative platform for developers where developers can develop android applications easily. There is also a developer friendly platform MCSS using the time consumption of developing will be decreased and give a responsive look to our project. MCSS is a low code platform that makes it simple to develop a high-code program.